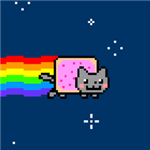 Nyan Cat is the name of a YouTube video uploaded in April 2011, which became an internet meme. The video merged a Japanese pop song with an animated cartoon cat with a Pop-Tart for a torso, flying through space, and leaving a rainbow trail behind it. The video ranked at number 5 on the list of most viewed YouTube videos in 2011.

GIF
On April 2, 2011, the GIF animation of the cat was posted by 25-year-old Christopher Torres of Dallas, Texas, who uses the name "prguitarman", on his website LOL-Comics.

Song
The original version of the song "Nyanyanyanyanyanyanya!" was uploaded by user "daniwellP" to the Japanese video site Niconico on July 25, 2010. The song features the Vocaloid virtual singer Hatsune Miku.

Producer "ももももP" published a cover version of the song using the UTAU voice Momone Momo. It was uploaded to NicoNico on January 31, 2011. The cover was named "Nyan Cat" and its sound source was used for the later popular YouTube video.