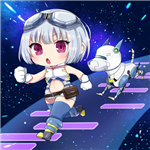 Leaping Destiny is a 3D rhythm game for smartphones developed by DWARF PLANET Inc. The game was released on May 24th, 2019.