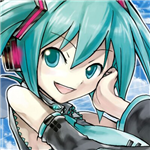 The game's online servers were shut down on January 22, 2011. An offline version, Typenist Single, was released on August 10, 2012 exclusively at Comiket 82.