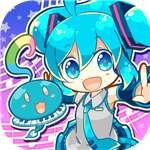 MikuColle features more than 1500 high quality cards drawn by popular illustrators, the players build a deck of cards to venture through many quests in worlds based on popular Hatsune Miku songs to defeat enemies and collect items and costumes. Songs in the game are used as BGM.

The game theme song is Rooter's Song by DECO*27.