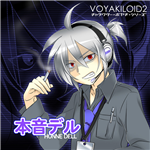 A Vocaloid derivative, created by CAFFEIN. The fandom views him to be based on Vocaloid Kagamine Len, however, his origins are derived from Yowane Haku.
(...)
He is depicted to be a kuudere, workaholic, smoker and a hacker. He is speculated by fans to have an excellent command in the English language.
As per Caffein's illustration, he appears to exude a hint of hostility, possibly attributed as a failure of Kagamine Len.
Caffein has written that he is better than what Haku could do, in the author's context that Dell is a character not as a Vocaloid, but rather, a user of Vocaloid.
(...)
Dell is initially marked as vocalizations of Len Kagamine gone bad. It is surprisingly easy to make substandard output with Len, due to the inconsistency of his voice volume. However, other trends achieve Dell's voice in another way, by downsampling songs with Len's voice, to produce Dell's voice. -Fanloid wiki

Disclaimer:
Derivatives are NOT supposed to be a voicebank. They do NOT have an own voice. There is only a regular/popular way to tune them from an original voicebank e.g. Hatsune Miku.

The following NicoNico tags are mapped to this tag: 本音デル