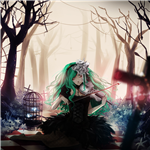 The goth subculture is a subculture that began in England during the early 1980s, where it developed from the audience of gothic rock, an offshoot of the post-punk genre.
Its imagery and cultural proclivities indicate influences from 19th-century Gothic literature and gothic horror films. The scene is centered on music festivals, nightclubs and organized meetings, especially in Western Europe.

The goth subculture has associated tastes in music, aesthetics, and fashion. The music preferred by the goth subculture includes a number of different styles, e.g. gothic rock, death rock, post-punk, cold wave, dark wave, and ethereal wave.
Styles of dress within the subculture draw on punk, new wave and new romantic fashion as well as fashion of earlier periods such as the Victorian and Edwardian eras (Belle Époque), or combinations of the above.
The style usually includes dark attire (often black), pale face makeup and black hair. The subculture continues to draw interest from a large audience decades after its emergence.
-Wikipedia