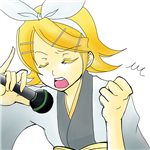 A popular Japanese music genre considered to resemble traditional Japanese music stylistically. Modern enka, however, is a relatively recent musical form, while adopting a more traditional musical style in its vocalism than ryūkōka music, popular during the prewar years.
Modern enka, as developed in the postwar era, is a form of sentimental ballad music. Some of the first modern enka singers were Hachiro Kasuga, Michiya Mihashi, and Hideo Murata. The revival of enka in its modern form is said to date from 1969, when Keiko Fuji made her debut. The most famous male enka singer is Kiyoshi Hikawa. -Wikipedia