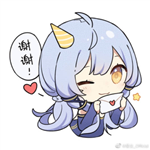 Xingchen's birthday or anniversary is usually celebrated on her assigned birthday, which is August 12th, instead of her release date.
(Not to be confused with her arrival anniversary (降临日, Feb 20th 2016), on which day her first official demo released.)