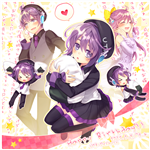 Her birthday is celebrated annually between these two dates in Japan.