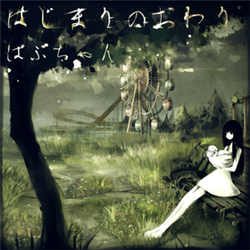 A Letter From Below

This one is old school Babuchan. Less screaming, less ear rape but still peppered with heavy riffs but that's fine because it mixes well.

Preface: My knowledge of music and its terminology is rather limited as my knowledge of it is not academically received and I don't care much for genre talks so I won't spend any time describing them.

Anyway, this one is an old favourite of mine from Babuchan. The tracks are wonderfully composed and atmospheric with few tracks seamlessly blend into one another. The instruments are varied with classical instruments, synths, and unconventional noises; all of which to create atmosphere and relay messages in the tracks more clearly. Although there are energetic pieces in this album, it's mostly somber and slow as the general theme is that of melancholy and dread.

As for Vocaloid manipulation, the vocal is well controlled such that the pitch may be high in some parts but it never tethers over to the point of annoyance. However, there's little sense producer's own personal touches in the Vocaloid other than than it's properly tuned and controlled. This is not necessarily a merit or a demerit, it's just something to note. If you are a fan of sweet and demure vocal, this album has it. If you are a fan of glitchy and distorted vocal, this album also has it. In some tracks it has a mixture of both.

This album has an exemplar track which is track number 5, 笑笑笑 or LOLOLOL. Now, I won't get into the lyrics since I think it's up for interpretation but my god, the track, the vocal and how it's composed together, it's unbeliveable. The playful piano notes, the vocal inflections, the rhythmic thumps, describe a sense of mocking. Like if the song is sung for someone it is sung to ridicule them. With the ridiculement slowly turning into threats. At 74 seconds, the track hits you with a crescendo and an allegro, it suddenly gets faster and louder for a brief period as your ears are flooded with an underworldy mixture of sounds. Yet in this morbid hamony I could find beauty and with it, enjoyment. But this is merely a tease to the climax. Then the track carry on, more energetic than before. At 2 minute mark, the song goes on a brief pause for 4 seconds where you hear nothing but haunting distorted noises and an excerpt from a music box. In the end, the song drops all pretense and proceed with its climax; a 43 second of catharsis. All of these parts combine together into one masterpiece. This is one of the tracks that I occasionally listen with my eyes closed. Because the track begs for my mind to visualise its sound and its excerpts, to give it form and story. And every time it does, images of an ambiguous crimson stageplay with prancing ballerinas is always there. In my honest opinion, this song is peak Babuchan as it is generally great, loopable, very atmospheric with a touch of dread in audio form.

All in all, great album. It gets big numbers from me. I don't loop it regularly but going back it at every once in a while always fills me with joy.