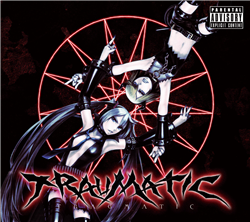 My favorite utsu p album i love how he use more blast beats on this album wish he'd use more blast beats on this album. the songs that have the blast beats got me in to the death metal. Cannibal Corpse - Deicide - Decapitated. Decapitated plays technical death metal tho. The production can use a little more polishing. if your listening to any other album from Utsu P and switch to TRAUMATIC you can hear a difference but you get used to it quickly. As for the songs there all Amazing they're are no bad one's to me there all great songs.This albums has to be heavies because there more blast beats and faster playing overall with songs like Constipation Of Death - TRAUMATIC - Parasite - DOLL - Heart Sutra Hardcore Make this album heavy. I would prefer if Utsu P balanced miku and rin because for the majority of the album it's rin but that's not bad i love rin but it should been an equal amount of rin and miku. My top five TRAUMATIC songs are THE DYING MESSAGE - Parasite - Doll - Heart Sutra Hardcore - Sleepwalk. In no particular order these five songs are my favorite. I give the album 9/10 if there was more balancing of miku and rin it be 10/10 but amazing album either way.