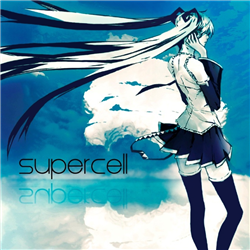 Supercell is an interesting album, not just because it showcases famous Vocaloid music from the late 2000’s featuring Hatsune Miku. The album presents itself as a small but integral part of VocalSynth history that put Hatsune Miku, and ultimately Vocaloid, on the musical map.

Most of these songs are in the rock genre, which is palatable to most music listeners. No techno or anything, unlike artists like Clean Tears or AVTechNO!.

I think fans underplay just how important most of these songs are to Vocaloid culture. As ubnubmaster put it in the case of “Melt,” “Gradually Vocaloid would change, but Melt always remained.” The songs in the album aren’t really influenced by time. The themes and tones are just as interesting to listen to now just as they were 10-13 years ago. It’s like the many songs your parents would play from the 80’s and 90’s. Even now the songs are fun, interesting, and even relevant to listen to. It’s the same with this album.

I say give this album a listen. You’ll find at least a couple of tracks that you’ll enjoy, and at the very least if you’re a new listener to Vocaloid, it’s a good introduction into the Vocaloid World. It’s one of the more easier-to-access albums as well. All of the songs are on YouTube as well, as a re-upload (or official upload with their own videos).

I strongly recommend that new and old fans give this album a listen.